Nothing could have prepared me for the sheer magnitude and scope of the procedures I was going to need for my gastric sleeve operation.  As someone who had been to the doctor only a handful of times in the past 15 years it was completely mind blowing.  Due to my BMI my surgeon required that I have an IVC filter placed to protect against clots post surgery which added a whole additional layer of procedures to my already very full schedule. 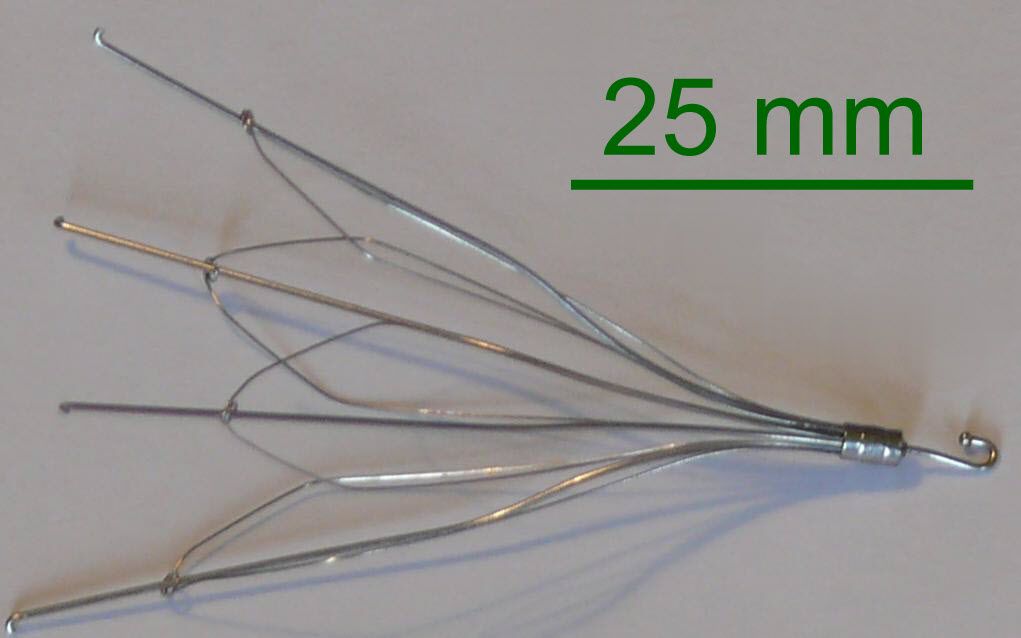 What’s an IVC filter?  Click the pic above to find out more, image courtesy of wikipedia.

Besides the standard office visits and clearances there were several procedures that would require varying forms of anesthesia, it’s important to note that before this I had never been sedated for any procedure.  When I had my wisdom teeth out I was awake for the entire procedure, although I have blocked most of that traumatic memory I clearly recall that my dentist kept trying to show me the teeth that he was chiseling out of my head. It was all I could do at the time to respond with a desperate “blurgle gurgle burgle” in protest but it was to no avail.

My only real first hand experiences with anesthesia were my wife’s relatively serene/comatose responses to sedation and when I took my son to have tubes put in his ears.  Honestly the latter was probably the most traumatic day of my life, the look of betrayal in his eyes as I held him down while he kicked and screamed as they sedated him was haunting.  When he finally woke up it was like one of those scenes out of a movie when someone comes back from the dead, he lurched up in the bed gasping for air with no idea where he was.  It took me a solid 30 minutes to calm him down and so needless to say I was approaching these procedures cautiously as I had no idea how I would react.

First up was my visit to the gastroenterologist, he was a nice enough guy and walked me through the procedure and explained I would undergo deep general anesthesia and I would be asleep for the procedure.  I scheduled my appointment and arranged to have my wife pick me up and drop me off at the surgical center.  Everything went swimmingly until they rolled me into the room for the procedure.  They began by explaining the procedure and how he was going to put me asleep and not to worry, they proceeded to hook me up to various pieces of equipment and strapped a mask on my face.  I tried not to panic, it kind of felt like I was being abducted by aliens, staring up at the ceiling, bright lights in my eyes, little blue men wandering around.  To my surprise he didn’t do the backwards countdown, he just said “ok you should be feeling sleepy, you should be asleep soon” which in turn caused me to start to panic as I, of course, was still awake and listening to him tell me I should be asleep.  My mind was racing, oh my god this isn’t going to work, maybe he didn’t give me enough, holy crap I don’t want to be awake for this, I wonder if panicking will make me fall asleep faster….. and then I was waking up in my hospital bed about an hour later feeling no worse for wear.  I was up and out of there within 30 minutes or so of waking up and out the door suffering no ill effects.

Side Note – Fellas this is where I would like to mention that if you are a little  “gun shy” around strangers be prepared to have a dozen or more nurses/doctors see your manhood throughout the different procedures including the ultrasounds on your legs (p.s. that jelly is cold!).  This is just a little peek into what women go through on a regular basis so if nothing else maybe we can sympathize a little more after this.

The next trip was to the vascular surgeon, he would be the one who would place and later remove the IVC filter.  This time the sedation would be much more mild and I would be awake for the procedure.  The IVC filter (info above) is placed through a procedure in your groin and later removed through your neck (yeah who knew you have an artery that runs that direction?!).  I specifically asked multiple times if I needed to shave the area the procedure was in and was told not to worry about it and to just wash with the special soap I was given and sleep on clean sheets the night before.  So you can imagine my surprise when I show up for the surgery and I am informed I will need to be “clipped”.  I’m sure the nurse does this dozens of times a day but I was completely mortified as she went to work.

While the nurse was busy buzzing away my anesthesiologist, an older gentleman, showed up and offered to help draw the blood samples that were needed.  He was struggling to find a vein, his hands were shaky and you could tell the nurses normally did this part for him, I held my clenched fist up, down, left and right until he seemed to find one he was happy with.  He muttered under his breath until finally “HOLD IT RIGHT THERE!  Don’t move or its going to fall out… oh boy… nurse I need help cleaning up I made a mess…” I began to joke about how it couldn’t be that bad and peered over the side of the bed.  It looked like a crime scene, blood on the side of the bed, my gown, the floor.  I couldn’t help but wonder how anyone could get away with murder if this is what happens just for a routine IV placement.  Before long everything was cleaned up and under control and I was off for the filter insertion.  It was a sort of surreal feeling, I had full control over my motor functions but couldn’t really feel anything besides a sort of pressure of them tugging and pulling and an almost grating sensation as the filter was being placed.   They put a curtain below your neck so you can’t see anything but I listened to the doctor as he explained everything out-loud to his assistant (who I assume was a medical student).   After the procedure was done I was in and out in about half hour again with little to no side effects from the anesthesia or procedure.

For the actual gastric sleeve surgery I was again put under deep general anesthesia.  The operation was performed at the same hospital as the IVC filter and to my surprise I had the same nurse.  When she came by to draw blood I expressed my relief that she was doing it instead of “Doctor Shaky Hands” and we joked about how at least this time I didn’t need a clipping done in my down under.  Much to my chagrin I would again need some grooming but (thankfully?) since it was on my stomach I was treated to a not-so-gentle waxing, thank you Sweet Baby Jesus (my favorite Jesus) that I am not a hairy guy.  After being moved to the operating room and positioned in place, I don’t fit comfortably on the tables so they had to put stretchers under my arms and prop me up, I was quickly knocked out (again no counting backwards boo!).  I woke up as I was leaving and heading to have my new stomach checked for leaks.  They x-rayed my stomach and I got to see how liquids splish splash their way into my gut on the screen which was kind of trippy in a way (although you could possibly attribute that to the narcotics).  Unlike my wife the fog and sleepiness cleared quickly and I was up walking laps within the hour.  The only ill effect I was suffering besides an extremely swollen stomach, which would not willingly receive food or water, was an incredible amount of gas pain that could only be relieved by walking.  Thankfully that dispersed after a few days and after a week long struggle with cramps and dehydration I was fully on the mend.

Last but not least, a few months after the surgery I was back at the hospital to have the IVC filter removed.  For the third time I had the same nurse who was finally spared some sort of manscaping on me.  I couldn’t help but groan however when “Doctor Shaky Hands” strode in my waiting area to draw blood.  He must of had less coffee or took his “anti-shaky” pills that morning because he managed to tap into a vein quickly and without the horror movie-esque blood splattering.  This time the anesthesia must have worked a little better, I was aware of what was going on but was less cognizant, I distinctly remember the sensation of them removing the filter (kind of like a pipe cleaner going through your veins) that I had similarly felt when they placed it originally.  The surgeon was giving me instructions and jokingly remarked that I wouldn’t remember any of this anyway so the office would follow up with me after a couple of days.  Again I was up and functional fairly quickly, I did suffer some severe back pain/muscle spasms later that day and into the next week from laying on the table for an extended period of time.  I normally avoid painkillers whenever possible but I caved in and went to the doctors the next morning, I was prescribed muscle relaxers which along with a heat pad seemed to do the trick.

It’s been a long eleven months from my first nutritionist appointment to my final surgery and doctor appointments but I have a few new stories to share and a much smaller waist line.

Have any similar stories or comments?  Please share below!